DIAL is a joint venture consortium of GMR Group (54%), Airports Authority of India (26%), Fraport & Eraman Malaysia (10% each). GMR is the lead member of the consortium; Fraport AG is the airport operator, Eraman Malaysia – the retail advisors.

In January 2006, the consortium was awarded the concession to operate, manage and develop the IGI Airport following an international competitive bidding process. DIAL entered in to Operations, Management and Development Agreement (OMDA) on April 4, 2006 with the AAI. The initial term of the concession is 30 years extendable by a further 30 years.

Besides upgrading the existing terminals, DIAL has already commissioned a new runway 11-29 at IGI Airport on September 25, 2008. It has also inaugurated the new domestic departure terminal 1D (T1D) on 26th February, 2009. T1D will increase the capacity of domestic departures to 10 million passengers per annum.

In March 2010, DIAL has completed the construction of integrated passenger terminal (Terminal 3). The first phase of the airport is designed and capable to handle 60 million passengers per annum (mppa).

This development was the first phase of the airport expansion. In subsequent stages, the airport will be further developed with the increase in passenger demand and more terminals and runways would be added in a modular manner to form a U shaped complex with an ultimate design capacity of 100 million passengers per annum.

Delhi International Airport Ltd (DIAL) is working on a detailed plan to decongest its domestic terminals, 1D and 1C, used by low cost airlines, and expand facilities to meet the projected traffic growth to 100 million by 2033. 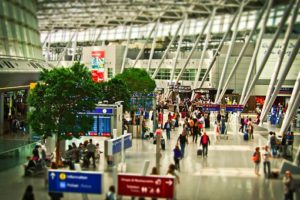 Delhi Airport has made plans to become plastic free by the end of year 2019. The airport authority has discussed ...
Read More